Your inability to stop us from sucking is a failure of leadership.

Gilfoyle (of course) to Richard Hendricks. 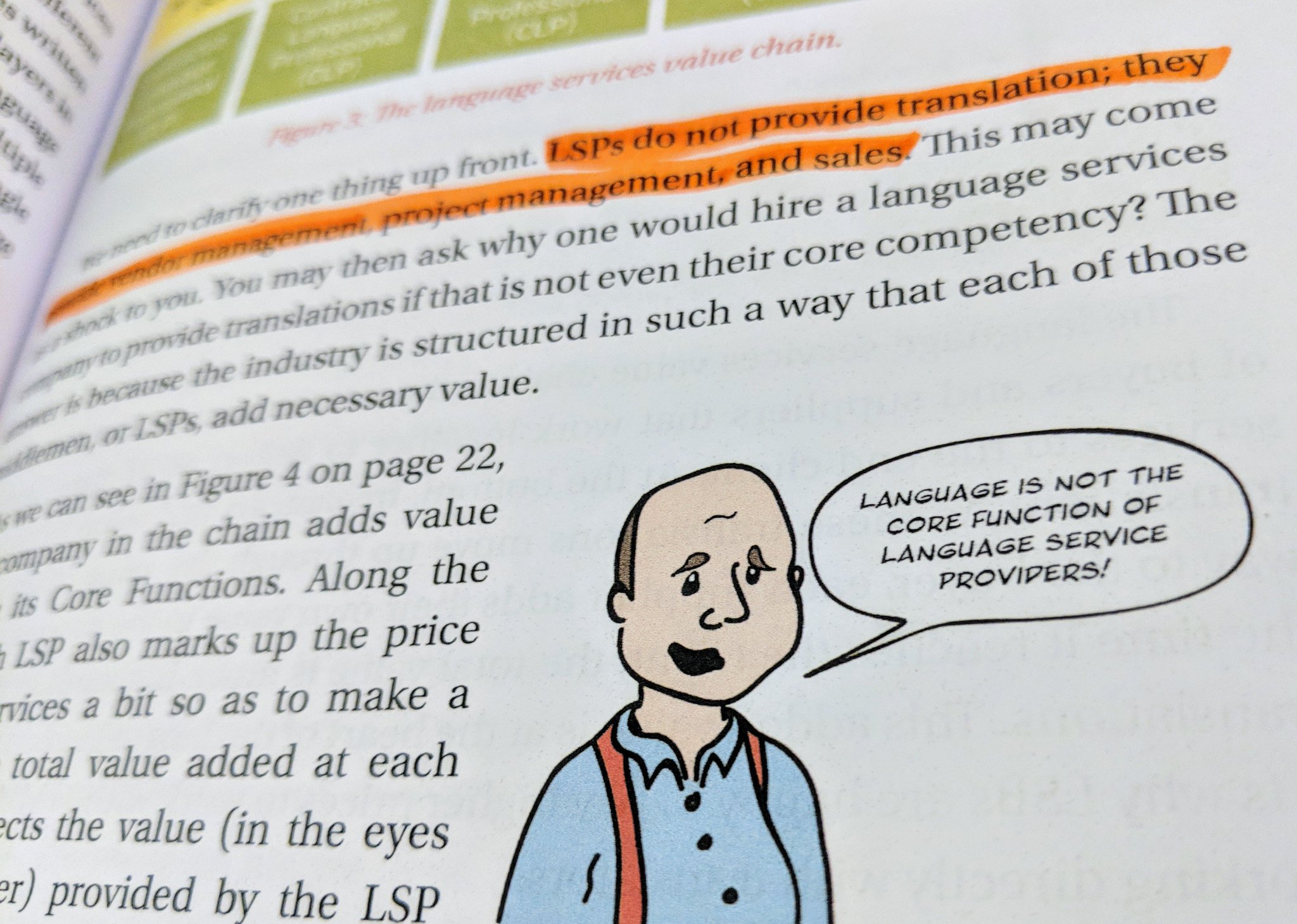 Unable to make GALA 2018 in Boston? Feeling the #FOMO for #GalaBoston18?

Virtually any product or service in the world can be replaced by a substitute.

(Except perhaps the despicable person who took away Tucker’s coffee.)

This may be a controversial statement, and Renato may disagree (and potentially given the above, Tucker may violently do so), but in this case, a substitute for GALA attendance, to tide you over to next year, could be their book, The General Theory of the Translation Company.

For anyone getting started in the industry, this book highlights the oddities that you wouldn’t expect, while giving a solid primer on how translation companies work. For someone who has spent their career in the industry, it gives a coherent structure for understanding experiences and shaping conversations around them. And it probably will make you think about a few things you’ve taken for granted.

1. On what translation companies do:

This is one of those obvious things that people outside the industry don’t realize. But it’s fundamental to the way the industry operates – with translation largely outsourced, but the core functions they list kept in-house.

2. On the eternal battle between project management and sales:

“The project management function is the single most important part of the entire language services provider.”
YET
“The language services industry is a very small industry with a high degree of emphasis on brand equity. Your salespersons are your primary brand equity ambassadors. They have the power to greatly influence your reputation within the industry for better or for worse.”

Renato started out in sales. Tucker in project management. So, it’s not surprising their description of each is heroic. Yet…I can’t disagree with either. Without strong project management (which extends beyond the production side to client intake and program management), the best sales person will churn through clients. The best way to grow a business is though keeping your current clients coming back. But the second best way to grow is to have strong sales people getting your company well-positioned as each new deal comes into focus. And that skill is often rare.

3. On skepticism of the the promises of automation:

“A fully automated process has long been the sought after Holy Grail of the industry.”
YET
“Taking advantage of the technology that is available today, a single project manager can efficiently handle the work that would have taken 10 project managers as recently as a decade ago.”

The diagram below comes from their book as well – and it illustrates neatly the difference good project management software can make. Instead of project managers serving as email traffic cops, they monitor for the exceptions – which are what take up most of the time. And the exceptions are also what make the “fully automated process” this mystical faraway goal that always seems on the horizon. Current technology can makes things much easier most of the time, but people still need to deal with the exceptions which happen every day. 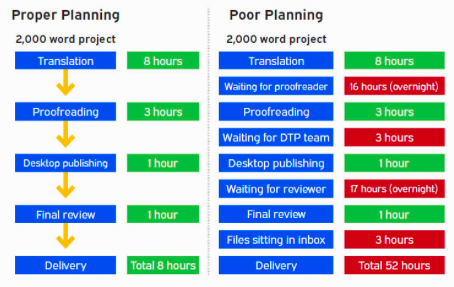 4. On the exit plans of translation company CEOs:

“We haven’t seen it yet but one day we would love to see an honest company unveil their new corporate mission statement that is just a bunch of green dollar signs followed by smiley face emojis. Or perhaps a Vision Statement that includes the CEO’s dream of one day owning a vacation home in Malta.”

Rory Cowan described much the same thing in his SlatorCon 2017 New York presentation explaining that many top execs just want “to exit and sip Mai Tais on the beach.”

The 5th thing I learned – On the peculiar dynamism of the translation industry:

Renato and Tucker made it very clear that there was a lot of dynamism:

What happens when the language services industry is squeezed? Well, mostly the same thing. People get laid off. People look for new jobs. People dream of going into business for themselves. But because of the very low barrier to entry in the industry, those people who are contemplating starting their own business actually have the power to do so.”

And yet, they describe a fundamental weakness:

There is a Catch-22 at play here. Nobody reports on the industry because it is not well understood and it is not well understood because nobody has taken the time to report on it. What this means is that the only people who are reporting on it are those from the industry, since they are the only ones who understand it properly. This can be problematic for two reasons…

Industry insiders are often reluctant to be critical of other players in the industry, for fear of rocking the boat too much… [which leads to] a deficit of any meaningful or actionable new information or insight into the language services industry…

You would be hard pressed to get too many industry insiders to admit it in mixed company, but this lack of outside analysis is a serious threat. The resulting groupthink compromises the credibility of the industry and serves to limit both the amount and quality of information available on the industry even further.

The dynamism is what leads to so many small companies that do well enough to create exits for their founders. And it leads to a lot of dynamic individuals driving the industry. But the lack of outside understanding and analysis – evident in many of the Silicon Valley tech startups that seem focused on theoretical problems divorced from the reality of the industry – leads to a kind of stagnation. Ideas that would probably work, but failed miserably are often passed on for years longer because the industry is insular.

I appreciate that through Nimzdi, their consulting company, Renato and Tucker are trying to address this issue. I especially commend their Nimzdi 100 for not just providing a handy list that was sort-able and easy to find, how they accounted for things such as “language services business units inside larger corporations,” but most of all for how accessible they made their data – with their raw data able to be downloaded by other analysts.

In the past year, between Slator, Nimdzi, and even a subreddit dedicated to the translation business, the translation industry is beginning to open up it’s information more to outsiders. Which – as Renato and Tucker say – is to the good.

So, what are the 5 top things that people learned from GALA this year?