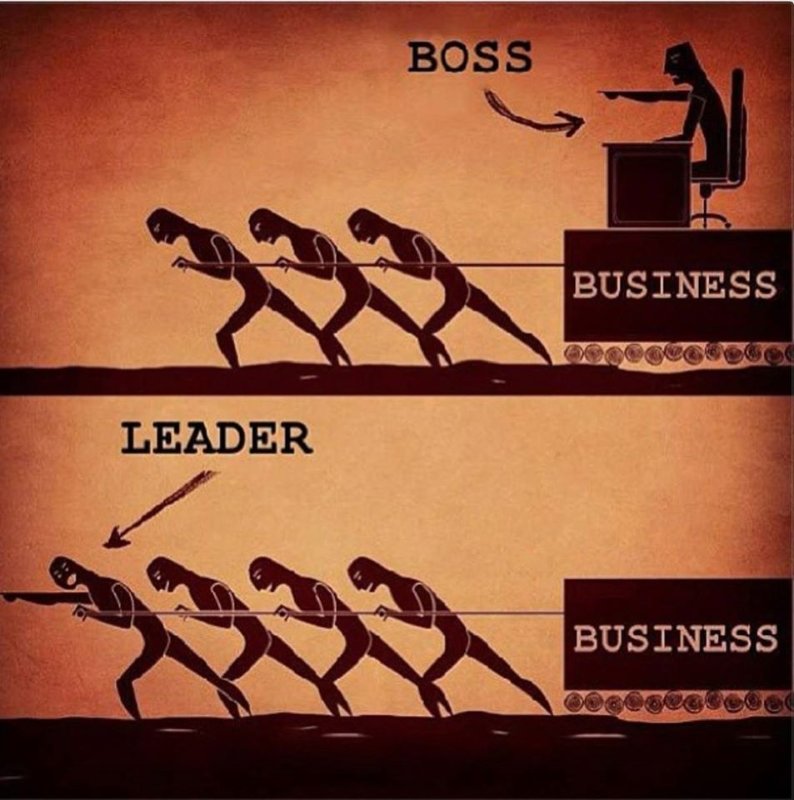 Because you can’t be both.*

I propose 3 questions that determine the difference.

1. Do you embody the values you preach? Or are you a hypocrite?

If you are a manager, then your actions are under extra scrutiny. People will notice when you say one thing, but do another. The quickest way to demoralize your employees is to be a hypocritical boss rather than a leader with integrity.

If you’re a boss, you may expect your employees to work late, while you go home early. You may take holidays that you don’t give them.

A leader and boss may say the same words, but their employees know the difference. And the exact same words have a markedly different effect.

When a boss talks about promoting “a collaborative workplace culture” as they act dictatorially, it saps at morale.  When a leader encourages open dialog and collaboration and brings employees into decisions, it boosts it. When a boss brags about “protecting their team” even as they publicly criticize them as underperformers, the hypocrisy is clearly telegraphed and undermines faith in the enterprise.

Everyone with a certain level of success can amplify their voice. Even Bill Cosby has a PR team. But having a real vision that can motivate people is something special. Many managers simply don’t have it. They may ask their employees for ideas, and then take the credit for them. They may jump from one idea to another without regard for the consequences. These are signs that a manager has become a boss rather than a leader.

A leader on the other hand has a vision of the future. It may change and evolve with conversation and collaboration. It will have to grow if it is to succeed. But it’s there. You can see the light in their eyes when they talk, the excitement in their voice. A leader can authentically persuade people to buy into their vision.

Others may pose as leaders – while making clear they aren’t – insisting that they persuade their teams by exercising “authority” through use of “positional influence without being seen as dictatorial.” In the end, the game is given away by the phrasing: “Don’t be seen as dictatorial” is something a PR team tells you…that you aren’t supposed to say out loud.

In public though, a PR team is a decent way to paper over this difference – but in private, it’s almost impossible to motivate a team by pointing to news clippings. Especially when they are contradicted by your own behavior.

A manager needs to understand that they are in a position of power over their employees. And that that position can easily be abused. Words said by a manager carry extra weight to their employees. Self-awareness is a key aspect of the emotional intelligence required to be a good manager. As Sharron Adler wrote:

It is not the monsters we should be afraid of; it is the people that don’t recognize the same monsters inside of themself.

A leader needs to be aware of their own monsters – for if they only see monsters in others, it’s certain theirs are running wild.

Leaders acknowledge this and go the extra mile to make sure that their employees know that they don’t consider themselves intrinsically better. They realize that being a manager is a privilege. And that their teams aren’t just necessary props who can be “replaced” or “upgraded” but are owners and drives of the leader’s own success. They bring them into the process. They trust them and empower them with actions, instead of just words.

A boss on the other hand will declare that their success is self-made. And not realize the slight this gives to everyone who works with them. A boss will take every opportunity to demonstrate their power, at worst through bullying and harassment. A boss will see a line waiting to go up to the elevator and decide against basic rules of fairness that they have the authority to walk to the front and cut that line. This lack of self-awareness leads to toxic behavior.

The little things people do are noticed. They make an enormous impact – far more than PR agents ghostwriting. Those whose images are pristinely kept in public, hiding monsters within, are those who fall hardest when truth outs, as it does eventually.